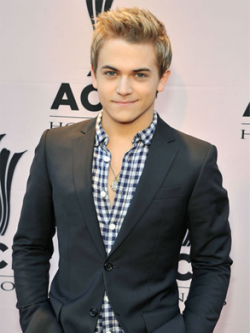 Hunter Easton Hayes (born September 9, 1991) is an American country music singer, songwriter, and multi-instrumentalist. He is signed to Atlantic Records Nashville, and released his self-titled debut album in October 2011. The album includes the Top 15 country single “Storm Warning” and the number 1 singles “Wanted” and “Somebody’s Heartbreak”. A 2013 re-issue included the track “I Want Crazy”, which served as the album’s fourth single.

Hayes was born on September 9, 1991, at Larniurg Hospital in Breaux Bridge, Louisiana, as the only child to Lynette Hayes and Leo Hayes. He has Cajun ancestry. He began his musical career at the age of two when his grandmother gave him a toy accordion. At the age of four, he began making appearances at local performances and on national television, including showings on Maury, Rosie O’Donnell, and Nickelodeon’s game show Figure It Out, where he performed “Jambalaya (On the Bayou)” with Hank Williams Jr. from his first album Through My Eyes. American Songwriter writes that “Hayes received his first guitar from actor Robert Duvall at age six” At seven years old, Hunter was invited to perform for President Bill Clinton for a White House lawn party. At the age of 13, Hayes appeared on America’s Most Talented Kids, a show hosted by Dave Coulier. He performed the hit Hank Williams song, “Hey Good Lookin’.”

In 2008, he moved from his hometown of Breaux Bridge, Louisiana to Nashville, Tennessee to be signed with Universal Music Publishing Group as a songwriter. He graduated in 2007, at the age of 16, and in 2010, co-wrote “Play” for the Rascal Flatts album Nothing Like This. In September 2010, Hayes was signed to Atlantic Records Nashville and began working on what would become his major-label debut album.

Hayes appeared as the opening act of ten dates of country star Taylor Swift’s Speak Now World Tour throughout the summer of 2011 and concluded his leg of the tour in St. Louis, Missouri.[9] In late April 2011, Hunter went on his own radio tour that lasted approximately 10 weeks on which he debuted songs that would appear on his self-titled album. Hayes debut headlining tour was entitled the Most Wanted Tour; the first leg of the tour began on October 8, 2011, in Beaumont, Texas, and ended on December 4, 2011, in San Bernardino, California.

Hayes and actress/singer Victoria Justice contributed a duet to the soundtrack of 2011’s Footloose remake, recording a cover of Mike Reno and Ann Wilson’s 1984 hit “Almost Paradise” from the original film. Hayes made a sneak appearance on the compilation album Now That’s What I Call Music! 41 with his song “Somebody’s Heartbreak,” originally heard on his self-titled album.

From January to February 2012, Hayes was the opening act on the Rascal Flatts “Thaw Out” tour.

“Where We Left Off” is an original song, written by Hayes, that can be heard on the soundtrack for the 2012 war film Act of Valor.[14] During the 2012 O Music Awards, The Flaming Lips broke a Guinness World Record (previously held by Jay-Z) for most concerts played in multiple cities in a 24-hr period. Hunter was the opening act for The Flaming Lips at the Hattiesburg, Mississippi stop.

In May 2012, Martin Guitars named Hayes as C.F. Martin & Co.’s newest brand ambassador. American Songwriter quoted Hayes on the subject: “It is an absolute honor to be named an official Martin Ambassador and to be recognized by the Martin family.”

On September 7, 2012, two days shy of his 21st birthday, he was inducted, as the youngest member, into the Louisiana Music Hall of Fame at the Mahalia Jackson Theater in New Orleans, Louisiana during a benefit concert for the Oschner Pediatrics.